An overview of Istanbul vital areas useful to the city’s visitors.

Information about Istanbul – the most important tourist sights:

Istanbul is the connecting city between east and west blending diverse civilizations and cultures. The city is considered as a tourist magnet attracting visitors from all over the world and ranking as 6th most visited tourist city in the world.

The historical heritage of Istanbul is enriched through various mosques, basilicas, cathedrals and old bazaars. Istanbul is the largest city in Turkey by far and its beauty and charm lure visitors from all over the world.

It is challenging to highlight all information pertaining to Istanbul, but we managed to select few of the most important and recognized sights:

Known also as the “Tower of Christ” and also called the “Great Tower” by the Byzantines. No specific dates are confirmed to when it was built, but rumors say the tower was built in 507 AD. 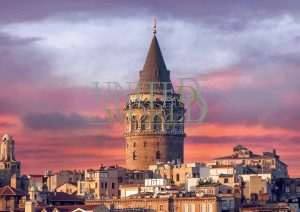 The tower experienced many face changes during the times and was completely renovated in 1509 by a renowned architect of that era. Sultan Suleiman the Magnificent used the tower as a prison for inmates working on the naval dockyard.

In the 16th century, an observatory was added at the very top by the astrologer, Takiyüddin Efendi, but the tower was destined to become a prison once more during the reign of Sultan Murat the 3rd between 1546 and 1595.

Early in the 17th century, the tower was briefly used by the Mehter Band, an Ottoman military band, and then became a fire observatory in 1717 because of its excellent bird’s-eye view of the historic city. In 1794, a fire destroyed the tower.

Located in the Eminönü district near Gülhane Park and Topkapı Palace, the museum was completed in 1891 during the Ottoman Empire era comprising of (3) museums: 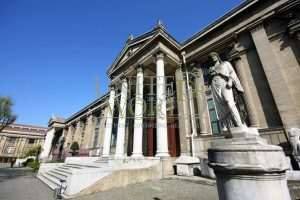 The (3) different museums contain a huge number of ancient and precious artifacts including the tomb of Alexander the Great and are considered as the first museum in Turkey.

Known also as the Church of the Holy Savior, Chora is a medieval Byzantine Greek Orthodox church located south of the Golden Horn area in the Edirnekapı neighborhood of Istanbul. The church was converted into a mosque in the 16th century AD. and later converted to a museum back in 1948. 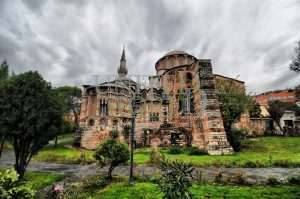 A relatively small church with an area of 742 sq. m., it is considered as one of the most beautiful Byzantine churches remaining in existence. The church contains marvelous paintings and mosaic tiling which makes it a worthy destination to visit.

Built by the Roman Emperor Justinian the First, the water reservoir system has been supplying water to Istanbul residents since the 6th century. Built utilizing advanced techniques for that era in an underground well, the reservoir has a capacity of 2.8 Million Cu. ft.

Dolmabahçe Palace located in the Beşiktaş district of Istanbul, Turkey, on the European side of the Bosphorus. The palace was designed with unprecedented luxury and opulence where Ottoman architects utilized the best available architecture techniques used in France, Germany, and Italy at that time to build this lavish palace. 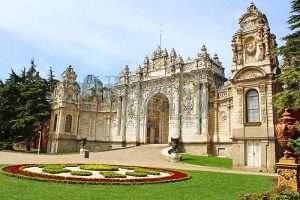 Served as the main administrative center of the Ottoman Empire from 1856 to 1887 and again from 1909 to 1922, the palace exhibited the traditional Ottoman lifestyle in its opulence and lavishness.  Architects blended various techniques such as the world-renowned Rococo style characterized by elaborate ornamentation, pastel color palette with the Baroque style characterized by grandeur, and a tendency to blur distinctions between the various arts.

Dolmabahçe Palace was home to (6) Ottoman Sultans. After the demise of the Ottoman Empire, the palace was used by Kamal Ataturk – the founder and the 1st president of the Republic of Turkey – as the summer presidential palace hosting important meetings. Its worth mentioning that Ataturk spent his last years in the palace where a special room was allocated to his use (now part of the museum). The clock at his room was stopped at 9:05 (the time of his death) as a sign mourning his death.

The building of the palace started in 1843 by instructions of Sultan Abdelhamid the 1st and was completed in 1856 at a cost equivalent to (35) tons of gold. (14) tons of gold were used to paint the 45,000 sq. m. ceilings covering an area of 110,000 sq. m. planted with trees. The palace interior contains 285 rooms and 46 lounges and is divided into (3) sections; Sultan Majlis section, Entertainment Section and Haremlik Section (designated for the Sultan’s ladies).

Considered as one of the most important sights in Istanbul, the mosque reflects the renowned Ottoman Empire architecture and is by far the largest mosque in the city. Despite being subjected to over 100 earthquakes, the mosque didn’t suffer any damage to its integrity. 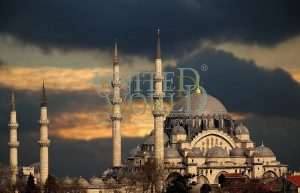 The mosque and the attached college were built by the famous architect Sinan during the era of Sultan Suleiman the Magnificent and was completed in (7) years.

The architect worked diligently to measure the distance between the Imam and the worshippers to ensure that his voice reaches all in the mosque through the use of water narghile. Due to the absence of electricity at that time, the mosque was lit by 275 huge lanterns. Wherever you look around the mosque, the word “God” الله is visible from any corner.

Information about Istanbul – the Grand Bazaar in Istanbul is one of the most recognized covered markets in Turkey and particularly in Istanbul. Visitors to the Bazaar can find thousands of various shops full of vibrant products mimicking life during the Ottoman Empire. The Bazaar contains over 3,000 shops under its dome and covering over 60 small roads and alleyways. 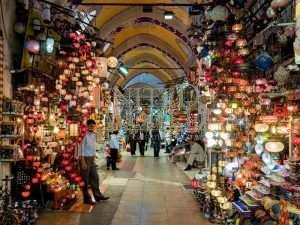 Considered as one of the oldest covered markets in Turkey, the Grand Bazaar dates back to the 15th century AD.  The 1st covered market was built back in 1455 on the instructions of Sultan Mohammed the 1st and was expanded by Sultan Suleiman the Magnificent in the 16th century.

The Bazaar witnessed numerous fires and earthquakes and suffered tremendous damage during the 1894 earthquake, however, it was renovated to its glory numerous times. Currently, thousands of visitors per day flock to marvel at the maze of architecture design.

Visitors to the Bazaar can enjoy a wide variety of shopping experiences where they can stroll down the roads specializing in gold or leather and furniture shops. Visitors can also indulge their senses with the tasting of delicious Turkish delights.

Information about Istanbul ranks the palace as one of the main historic attractions built during the Ottoman Empire. Topkapı Palace is surrounded by 5 km. long stone walls and guarded by 27 towers. The palace dates back to the 15th century and is located on a hill overlooking the sea of Marmara, the Bosphorus, and the Golden Horn area. 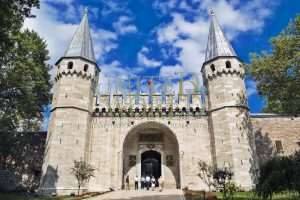 Built in the early 17th century, the mosque is still a place of worship nowadays closing its doors to visitors during the Muslim prayer times. All visitors must remove their shoes before entering the premises and women are asked to wear modest clothing and cover their hair as a show of respect for Islamic traditions. 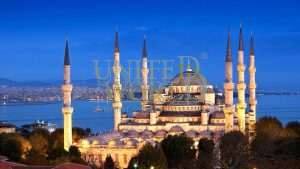 Hagia Sofia hosted many religions and faiths during the past centuries. Built as a Greek Orthodox Cathedral back in 537 AD., the cathedral was the residence of the Patriarch of Constantinople up the 12th century where it was converted into a Roman Catholic Church. In 1453, it was converted again to a mosque up to 1931 when it closed its doors. It was reopened again in 1935 as a museum. 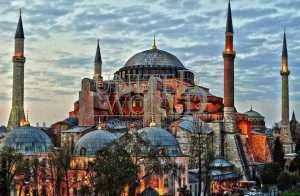 Once, Hagia Sofia was the largest cathedral in the world and a source of inspiration to many mosques including the Blue Mosque due to its magnificent Byzantine architecture.

Check properties for sale in Istanbul Apartments for sale within a complex in Antalya

Information about United World Turkey : First of all, we are professional company specialized in real estate marketing in Turkish republic. We have professional...